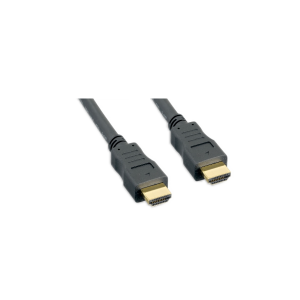 High-definition multimedia interface or HDMI for short is used for transmitting uncompressed video and audio digital data through a single cable. HDMI cables are the best cables available for TV’s, computer monitors, DVD player, consoles and such. The technology is a great alternative and because it delivers uncompressed digital signals it will result in a crystal clear image, incomparable to other technologies such as VGA.

The Convenience of HDMI Cables

Today, most newer consumer devices come with HDMI connectors. The first-ever HDMI cable was released in 2002, named HDMI 1.0. Since then, the technology has evolved and has been improved upon. Many versions were released over the years, offering greater performance, and because both video and audio signals are transmitted via one cable it will result in lesser cables and less cable management. The beauty of each new version of HDMI is that it improves upon the last iteration, as well as making it backward compatible with previous versions.

Other key benefits of HDMI cables

Version 1.4 HDMI 1.4 helps deliver finer colors that match what can be seen in the real world. The high bandwidth of HDMI also permits the use of 3D images. To have the 3-dimensional effect, 2 images must be transmitted (one for each eye) and because of the amazing performance, HDMI can achieve this without any loss in quality.

Version 2.0 Also known as the ultra-high definition HDMI,  version 2.0 has a higher bandwidth than the 1.4 and is better suited to deliver 4K video quality at 60 frames per second. Version 2.0 also came with 32 audio channel support at 1536kHz sampling frequency. Cables used with 2.0 can be used with home theatres that have high-end audio surround sound and TV’s with HDR support.

Version 2.1 Fast forward to 2019, HDMI 2.1 has been released and comes with higher bandwidth compared to the 2.0 version and have the possibility to deliver resolutions up to 8K. HDMI 2.1 released in 2017 and it is the first version to support Dynamic HDR which allows HDR to be adjusted frame by frame. HDMI 2.1 has a speed of 48 Gbps compared to 2.0 which has 18 Gbps. Therefore, the 2.1 connection can handle 4k videos at up to120 frames per second. TV’s with 4K support can now handle 4k resolutions of up to 140 frames per second which are all natively transmitted video. The resolution in combination with the frame rate will deliver much smoother action and more pleasurable video experience.

Just like VGA, HDMI cables will suffer a loss in quality, but only at a distance of about 50 feet, but most people will never need this amount. Longer cables will result in a glitchy and unwatchable video, you can find a quality 50 ft HDMI cable from custom manufacturers. Security is another plus with an HDMI connection. The information can only be displayed by the connected and authorized devices with no risk of other people tapping into it and pirate it.